Part owner and skipper of Olaso Uno, Mark Bath, approached the North Devon Marine Project as he started to plan a conversion of his yacht to lithium, solar and electric cooking in order to remove the need for gas and keep up with the modern demands for power. Here, Mark details what it’s been like to convert and cook on electric.

“How many of us have been out cruising and run out of gas; spent hours trying to track down a replacement cylinder, maybe trudged miles and visited several shops to find that illusive refill? And how many of us forget to turn the gas off after we have used it, found a leak and had gas in the bilges?

“Wouldn’t it be great if this was a thing of the past? It is! It’s now possible to get rid of the gas and cook on electricity, solar, with just the normal running of the engine. Here’s how we did it.

“It started by looking at the numbers. How much power did we need to store? How would we replenish all that? We purchased the planed cooker and induction cook top, along with a watt meter. We plugged it in at home and started using it to cook meals. We were astonished at just how little power it took to bake a cake, roast a chicken, boil a kettle, etc. Using that data we decided how much solar we needed and how big an alternator to fit to the engine, so that during the normal running of the engine we could, if needed, replenish an empty bank. Questions bounded around, such as what would the load of a 5Kw alternator do on our D2-55 when we where motoring in and out of Portsmouth harbour? What would the windage be on a solar arch? Are we making sound design decisions? North Devon Marine Project have been extremely helpful in ensuring we made the best decisions we could. I spent many hours integrating the various systems via the CAN protocol and NMEA2000 to allow it all to be monitored.

“Finally with the Lithium bank installed, solar arch and panels on board, inverter wired, alternator installed, we had a chance to use it in earnest and we have not been disappointed.

“Having been out sailing over the last 3 weekends cruising around the Solent, we have never seen the 400Ah battery bank dip below around 80% state of charge. With lithium you can take the bank all the way down to 20%, so we still have plenty of reserves for the grey overcast days. We have cooked full meals and boiled plenty of kettles on the induction hob, made toast and baked in the oven. We have seen the inverter loaded to 3Kw with the batteries and solar providing ample power to support our cooking demands.

“We have been blessed with three great weekends on board, one of which we picked up the new tender, which is hung from the solar arch. The last weekend was at anchor, spent outside a very busy Yarmouth, and we didn’t have to plug into the mains once. Those extra charges for electricity when we visit a marina? We hope they will also be a thing of the past now. We live on a swinging mooring and used to plug in at any opportunity to recharge our standard lead acid batteries.

“The graphs for the weekend of 26/27 June shows the results of the system, with cooking for over an hour at lunch time and again around 16:00. The second graph shows the impact of all this on the battery, with the SOC falling to around 87%. The engine ran for about an hour as we left and entered Portsmouth harbour, topping off the batteries as we motored.

“We are looking forward to pouring over the data of our travels in the wet winter months, to provide feedback to all the suppliers involved to find any improvements or enhancements.”

If you want to find out more about how you can sail electric, sign up to our site and send us a message. We are here to help. For more on WHY sailing electric is critical going forward, visit our project site, North Devon Marine. 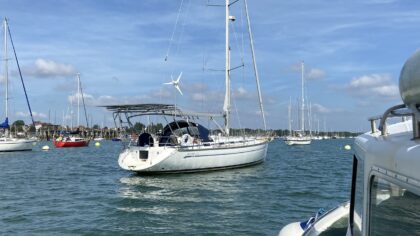 6 September 2021 | Blog Updates, Sailing electric
We use cookies on our website to give you the most relevant experience by remembering your preferences and repeat visits. By clicking “Accept All”, you consent to the use of ALL the cookies. However, you may visit "Cookie Settings" to provide a controlled consent.
Cookie SettingsAccept All
Manage consent

This website uses cookies to improve your experience while you navigate through the website. Out of these, the cookies that are categorized as necessary are stored on your browser as they are essential for the working of basic functionalities of the website. We also use third-party cookies that help us analyze and understand how you use this website. These cookies will be stored in your browser only with your consent. You also have the option to opt-out of these cookies. But opting out of some of these cookies may affect your browsing experience.
Necessary Always Enabled
Necessary cookies are absolutely essential for the website to function properly. These cookies ensure basic functionalities and security features of the website, anonymously.
Functional
Functional cookies help to perform certain functionalities like sharing the content of the website on social media platforms, collect feedbacks, and other third-party features.
Performance
Performance cookies are used to understand and analyze the key performance indexes of the website which helps in delivering a better user experience for the visitors.
Analytics
Analytical cookies are used to understand how visitors interact with the website. These cookies help provide information on metrics the number of visitors, bounce rate, traffic source, etc.
Advertisement
Advertisement cookies are used to provide visitors with relevant ads and marketing campaigns. These cookies track visitors across websites and collect information to provide customized ads.
Others
Other uncategorized cookies are those that are being analyzed and have not been classified into a category as yet.
SAVE & ACCEPT
×